Since I work as a children's book buyer at an independent store, you might logically assume that I buy board books, picture books, novels, and non-fiction. I do, of course, but I also buy sticker books, coloring books, hidden picture books, dot-to-dots, mazes, word searches, puzzles, cloth books, audio books, book and CD sets, calendars, workbooks and handwriting books.

I thought I'd share some of the gems I've found in these categories. They're the kind of books that rarely get reviewed, but that lots of customers ask for.

Need a really simple dot to dot book? Try Buki's great, compact activity books. They're terrific for kids ages 3 and up who are learning how to do dot to dots. They come in a lot of varieties and shades of complexities and fit easily into a backpack, purse or diaper bag.

On the other end of the spectrum, anyone who thinks they're too old for dot-to-dots should try the amazing puzzle books published by Monkeying Around. The books are accurately titled The Greatest Dot to Dot Books in the World. Each puzzle contain a variety of symbols and directions and there's no way to tell what the object is before you complete it. Younger kids might want to stick to volumes 1-3 or the Greatest Newspaper Dot to Dots. Older kids and adults should try Volumes 4-6.

My favorite one of all is The Greatest Dot to Dot Super Challenge: Book 6, which has many as a thousand dots per puzzle. I've been having so much fun doing the puzzles, each of which is incredibly creative and inventive. Some puzzles are made up entirely of symbols, or words, or compass points. 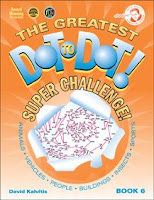 Check out their free sample pages for a small taste of what I'm talking about. The puzzles in Book 6 are much more elaborate and challenging than the samples. These books are fabulous for traveling or relaxing. I'd also recommend them for someone who's sick or in the hospital and looking for something fun to do.

Looking for unique coloring books? Check out Mindware, which carries a variety of fun and creative options. Some of my favorites include Microdesigns, Threads (intriguing quilt patterns to color), Animal Habitats, and Modern Patterns (where you can color molecules!) 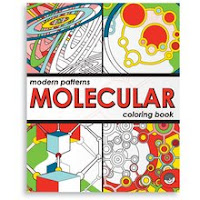 In a similar vein, I also like Sterling's series of Kids' Mandalas. They're a little easier and a little less complicated than the Mindware books, and I find them soothing and a lot of fun to color. 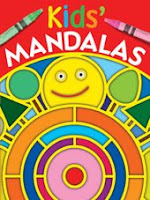 Lots of kids enjoy finding hidden pictures, but I've found that the Where's Waldo and I Spy books can sometimes be too intense and complicated for the under 5 crowd. Looking for something a little easier? I highly recommend Usborne's 1001 Things to Spot series.

The objects are (relatively) easy to find and are identified by both number and picture. That means that a child doesn't have to be able to read to use these books. I've found them to be great books for traveling or going to restaurants. My son also enjoys reading a page a night as part of his bedtime stories.

Got any other recommendations? I'm always on the look out for creative, imagining and challenging activity books.
Posted by Susan Kusel at 5:00 PM 5 comments:

For Better or For Worse: Stop!

In today's strip, what made Elizabeth stop the limousine on the way to her wedding?

Did she see her Uncle Phil leave the hospital?

It looks like Elizabeth is going to figure out by herself what's going on with Grandpa Jim. I like that.

Update:
Based on Thursday's strip, I see I was completely wrong about this one. Yes, obviously, I knew that in Wednesday's strip Liz was yelling at the kids to stop because they were driving her nuts. But, there was such an intensity in her expression (beyond even wedding day jitters), that I thought the "Stop!" was more than just a punchline and was a set-up for the next day's strip. Plus, Tuesday's strip had been about Uncle Phil leaving the hospital. So I thought it was likely that they passed the hospital on the way to the wedding and Liz was going to figure out what was going on with her grandfather.

Labels: Comic Strips, For Better or For Worse

For Better or For Worse: Grandpa Jim

Please forgive the lack of posting I've been doing as I finish up graduate school (only 3 more days left!) But I wanted to take a quick break from working on finals to ask what everyone thinks about the latest development in For Better or For Worse.

Quick update if you haven't been following it lately. The current storyline is ending on August 31st (see this article for more details). We're in the middle of Elizabeth and Anthony's wedding, which was moved up so that Grandpa Jim would be alive to see it. And then, on Saturday, August 16, here's the strip that ran.

So, what do you think? Is he going to make it? Are they going to move the wedding to the hospital? Will Liz be told about what's going on before or after the wedding? Is Grandpa Jim still going to be with us when the current timeline ends on August 31st? Leave a comment or vote in the new poll (or do both.)
Posted by Susan Kusel at 7:29 PM 1 comment:

Labels: Comic Strips, For Better or For Worse 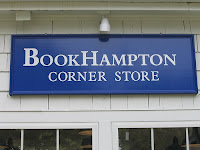 I'm proud to feature a guest post about the BookHampton bookstores in New York. Thanks so much to Rocco Staino for his in-depth post about this group of independent bookstores and the unique personality of each one. I'll have to plan a trip to the Hamptons to check out these terrific stores. Without further ado, here is Rocco's post (accompanied by the wonderful pictures he took).
~~~~~~~~~~~~~~~~

I would like to thank Wizards Wireless for this opportunity to blog about some of my favorite children departments in independent bookstores. With the advent of the major book chain stores it is becoming more difficult to find those independent bookstores each with their own character. Therefore, when I come upon such a store I can not help myself but to go in.

Each summer I spend sometime in Watermill, but most people just call it “the Hamptons.” According to Wikipedia, “the Hamptons are a well known playground for the rich who own summer homes there as well as a seaside resort frequented by the middle class residents of during the summer months for weekend getaways.” I am neither rich nor own a summer house there but I do enjoy the beach and the cultural offerings of the area.

While traveling through the , I always make sure I stop in at BookHampton. It is an independent bookstore with four locations: South Hampton, Sag Harbor, and Amagansett. I recently made the effort to stop at each location and gave their children’s department a close look. Each store is distinctly different reflecting the community in which it is located.

The store has a distinct room at the rear of the store inviting children into KidsHampton. 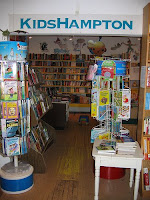 The warm space offers much opportunity to browse the selection which is large and varied. The young adult offerings are also extensive and definitely supplies the latest of all the popular series. I would say of all the stores the children collection is definitely the most extensive. 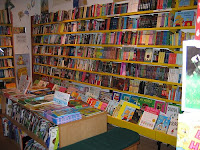 This, according to BookHampton owner, Charline Spektor, is due to the longtime store manager, Jane Cochran.

The of , an old whaling town, has a more feel to it. This is carried over into the BookHampton located there. 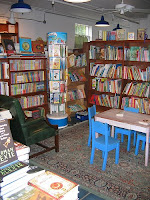 When I visited on a sunny July afternoon, I found a dad with his son nestled in a warm leather chair reading together. In addition there was a thirteen year old boy checking out the collection. Although the area is not as large as the area does have a cozier feel.

The of is most decidedly the most posh of the with retailers, such as Tiffany & Company, Ralph Lauren and Gucci lining the . 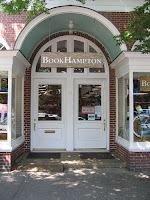 Well, I guess, most people are spending most of their time in those stores rather than buying children’s books. Out of the four BookHamptons, had the least inviting area and selection for children. This may be because a short drive from East Hampton is the newest and cutest BookHampton located on the green in the . 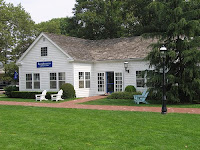 Spektor gushed about the store that “was designed with children in mind. There is a lovely space facing out into the green, filled with windows and natural light, and we've built in wide cushioned window seats, perfect for children and grandparents!” 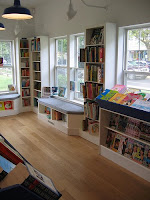 Each Saturday, there is a puppet show on the green and there is a story time at the store preceding the show. 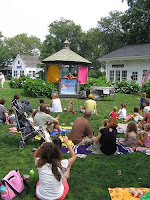 Spektor added that “Of course it is the selection of children's books that makes a store great, and BookHampton has a wonderful mix of classics and what we believe are soon-to-be-classics.” I found this to be true in all the stores. They have displays of well loved titles along side of such celebrity titles as Bernadette Peters’ new children’s book, Broadway Barks or pop-up books by Robert Sabuda or the new odd shaped and visually appealing interactive book, Pyramids and Mummies, by Anne Bolton.

If you happen to be on the east end of take a detour from the beach or people watching to checkout any or all of the BookHampton locations.

This post is part of the Wizards Wireless series of bookstore and library profiles. If you'd be willing to write a post about a library with a great children's department or a terrific independent bookstore that specializes in children's books, I'd love to feature it on my blog. See this post for more details about my search for guest bloggers.

Posted by Susan Kusel at 8:00 PM No comments: