A few months ago, I was invited to a small children's book preview event, where twelve authors were going to talk about their new or upcoming books. I tried to read as much as could before attending the event... I  always like to be as familiar as possible with an author's work before meeting them. 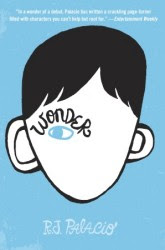 One of the books, Wonder by R.J. Palacio, only became available at my library the day before the event, so I found myself in my hotel room the night before with a long unread book. I figured I'd read the first chapter or two just to get a sense of the setting and the characters. I loved it. So I read another chapter. And another. Until it was four hours later and I'd read all 315 pages without stopping, writing down questions along the way. And then I just sat there in awe.

The next morning, I was surprised and delighted to find author R. J. Palacio sitting at my table. I told her how much I loved the book, and that I had a long list of questions to ask her. I think this put her off a bit, because it took her a few hours to start talking to me again. But she did- and we ended up having a lovely conversation. And she even answered all my questions.

I've waited a few months to post this because I wanted to let this book sink in. When I think about it, I can't help associating it with that mad, frantic rush I read it in. But really, Wonder is a book to savor and to enjoy over time. The craftsmanship, the exquisite turn of many a phrase, the humor, the way the author captures the essence of middle-schoolers... it's really something to slow down and appreciate.

I almost don't even want to tell you the plot because I don't want you to categorize or dismiss the book before you read it. Ostensibly, it's about a boy named August Pullman who has a facial deformity and who is starting public school for the first time. But it's really a lot more than that, and there's so much to learn as we see the world from Auggie's viewpoint.

When it comes time to making my 2013 Newbery predictions, you can bet that Wonder will be on the top of my list. Whether it'll win or receive an honor is really dependent on this year's committee and the other books published this year. I'll be on the edge of my seat at the press conference on January 28, 2013 at the American Library Association Midwinter meeting in Seattle and I'll bet many of my colleagues will too.


The other award that many people have predicted Wonder will win is the Schneider Family Award which is given to an author or illustrator for a book that embodies an artistic expression of the disability experience for child and adolescent audiences. But as Palacio reassures us multiple times, Auggie's facial differences do not make him disabled. So the question is, will the book be considered as an embodiment of disability? Auggie does, however, have trouble hearing- and the issue of his partial deafness is dealt with in a funny and endearing way, so if the book does get recognized by the Schneider committee, it may be due to that.

I'd also love to see it win or get nominated for the National Book Award, particularly since most of the winners in the Young People's Literature category lately seem to be written for young adults. It would great to see a younger book win some accolades.


As most of you probably know by now, R.J. Palacio is a pseudonym. To learn more about the author (whose actual name is Raquel Jaramillo) click here for an article from Publisher's Weekly about her and how she wrote the book.

Random House has launched an anti-bullying campaign based on Wonder called "Choose Kind." There's more about it here.

Of all the books I've read so far this year, nothing has stayed with me like Wonder. Nothing else has made me both laugh and cry at the same time. It's a book I hope everyone has a chance to read.

It's about eight hours until the announcement of the American Library Association's youth media awards. Excitement is in the air here at ALA's Midwinter Meeting in Dallas, Texas.

I've been making predictions for the past several years, and I've got to say this is a particularly tricky year. Obviously, every year is completely up in the air, but some years are a bit more predictable than others.

This isn't one of those years.

I'll throw out some names for the Caldecott:
-Wonderstruck
-Blackout
-Me, Jane
-Balloons Over Broadway
-Grandpa Green

and some for the Newbery:
-A Monster Calls
-Inside Out and Back Again
-Amelia Lost
-Our Only May Amelia
-Breadcrumbs
-Shades of Gray

but honestly, I think it's anyone's ball game. I think it's going to be one of those years where the winners are announced, and everyone at the press conference whispers to their neighbor: "What? What was that book?"

You may notice that I left the presumptive Newbery favorite Okay for Now off my list. I think it's a wonderful but flawed book.... and while I'd be delighted to see it win, I just don't think it's going to make it. Also, I put Wonderstruck only on the Caldecott list, because I think the illustrations are far and away the strongest part of the book.

We shall see. It could very well be none of the ones I listed above. Whatever it is, I can't wait to find out.