How do Caldecott and Newbery winning books get their shiny stickers?

Kim asks: "I was wondering if you could share how long it takes for copies of the winners get the medals on the covers? My daughter and I have been reading and picking our own Caldecott and Geisel favorites for the past couple of months. She understands what the medals on the covers mean now and I'd like to get some of this years winners but want to get them with the stickers on them. I can't seem to find an answer on how long this takes to happen. I assume book stores are sent stickers to put on their current stock?"

Brian responded with this comment: "It generally takes about a month."

I've always been curious about the stickers myself. I'm not sure that I have the definitive answer, but I've worked as a bookseller, a librarian, been a member of the organization that gives out the awards and had a talk with the publisher of an award winning book. I think I have a pretty good idea of what happens. To the best of my knowledge, here's the story behind the stickers.

Kim, before we get to your question, let's back up a little and talk about print runs and the incredible selling power of the Newbery and Caldecott Medals. When a book is published, a publisher decides how many copies to print. These initial copies are all first editions. If a book sells out its print run, the publisher will do additional printings and editions, but not every books gets a second printing.

There's no way a publisher can expect or predict a Newbery or Caldecott. Regardless of the pre-awards buzz, you never know what the committees will actually decide. No matter what the winning books initial print run was (with Hugo Cabret for example, it was quite large) there will never be enough copies to meet the demand. Available copies are purchased immediately by bookstores, libraries, schools, and a huge influx of customers. Typically, within a few hours of the announcements, all available copies of the book are sold out.

By that point, it's impossible to get the book, no matter what. The publisher has no more copies and thousands (I'm not exaggerating) of orders are pouring in. The publisher immediately starts a new and much larger print run to meet the sudden demand. Those copies typically come out within 1-3 months of the award announcement, depending how long the printing takes.

For booksellers, especially ones at independent stores like the ones I worked at, it is crucial to have as many of the winning and honor books in stock at the time of the announcement. If you don't, you won't get that initial rush of sales and you won't be able to get the book back on the shelf for at least a month. See this post for more about that.

Now, let's get back to the stickers. I wish I could tell you that on the day of the award announcement, everyone stops what they're doing and puts the stickers on the books. But really, it's much more mundane and gradual than that.

Nobody gets sent a batch of stickers. (That would be lovely, though). You have to pay for the stickers and they're purchased through the American Library Association Store. Anyone can buy them, incidentally, not just bookstores and libraries.

Sometimes, with paperback books or books that are perennially popular, the publisher will put a photograph of the sticker on the book. That way, for example, they don't have to keep buying Newbery honor stickers for every copy of Charlotte's Web that is ever published. Sometimes, in later printings, they don't even put the stickers on... it will just say "Newbery Medal Winner" above the title. I don't really understand that, though. My feeling is if you've got it, flaunt it.

Libraries typically have many of the medalists and honor books already on their shelves. Whatever they don't have, they'll order immediately (budget permitting), and they'll receive the second printing a month or two later. My library has rolls of all the various stickers in the area they process books. Eventually, they'll go through the books currently in the collection and add the stickers and will put them on the new books as they come in. School librarians do the same thing.

Bookstores are a different story. All of the copies purchased on the day of the announcements don't have stickers... if for no other reason than that there is simply no time. When I was a bookseller, I watched the winning books go out the door before I could blink. Booksellers typically wait for the second printing of the book which already has the stickers on it.

So the short answer is : it generally takes about a month. Usually a bit longer.

But your question raises an interesting point, which is that not everybody wants the edition with the sticker on it. Sometimes, I'm proud of the unstickered books, because I bought them before everyone else. And at other times, the book look naked to me without the sticker.

So, now you know. Travis at 100 Scope Notes wrote a great post last year predicting where the stickers would end up on the predicted winners. But, since the stickers go on gradually and (except for the ones put on by the publisher) haphazardly, the stickers can end up any place on the book.

Thanks for asking. It's a good question.
Posted by Susan Kusel at 6:00 PM 15 comments:

I'm having trouble getting onto the website at the moment because of the heavy traffic, but I was at the press conference in Denver this morning and was handed a press release after the announcement. I have to catch a plane, so forgive me for not including authors and publishers. All of that information is on ALA's website.

Caldecott Medal: House in the Night
Caldecott Honors: A Couple of Boys Have the Best Week Ever, How I Learned Geography, and River of Words: the Story of William Carlos Williams.

Newbery Medal: The Graveyard Book
Newbery Honors: The Underneath, The Surrender Tree: Poems of Cuba, Savvy, and After Tupac & D Foster

Geisel Award: Are You Ready to Play Outside?
Geisel Honors: Chicken said Cluck, One Boy, Stinky, Wolfsnail: A Backyard Predator.

Sibert Medal: We Are the Ship
Sibert Honors: Bodies from Ice and What to Do About Alice?

Carnegie Medal: March On! The Day by Brother Martin Changed the World

What are your thoughts? I'd love to hear them. Leave a comment below or vote in the poll on the sidebar.
Posted by Susan Kusel at 12:13 PM 7 comments:

In October, I posted my early ALA awards predictions. Today is the actual day of the annoucements. In fact, I'm in Denver at the American Library Associations' Midwinter Meeting and am getting ready to head to the press conference in a few minutes. We'll all know the winners within a few hours, but I wanted to post my last minute thoughts. These are the books I want to win, whether that happens, we shall see.

Caldecott: A Couple of Boys Have the Best Week Ever by Marla Frazee
Honor: Bear's Picture by Daniel Pinkwater and Little Yellow Leaf by Carin Berger. (I wouldn't be surprised to see House in the Night by Susan Marie Swanson on this list somewhere).

Newbery: I really wish it was going to be Trouble by Gary Schmidt, but I'm thinking that's not going to happen. I think it's going to be The Graveyard Book by Neil Gaiman.
Honor: The Underneath by Kathi Appelt, and a few surprises.

Geisel: Red Sled by Patricia Thomas.
Honor: Are You Ready to Play Outside? by Mo Willems and Mr. Putter and Tabby Run the Race by Cynthia Rylant. Plus, a surprise picture book or two.

Siebert: I'll Pass For Your Comrade by Anita Silvey (or at least an honor).

I hope you tune in to the live award announcement webcast (be sure to log-on to the webcast early so you don't get shut out). Click here to find out other ways you can find out about the announcements, both during and after the press conference.

Congratulations to every author who just had their life changed with a phone call.
Posted by Susan Kusel at 8:44 AM 4 comments:

Wondering who I am? After a year and a half of blogging, I'm finally posting my name and photo on Wizards Wireless.

My name is Susan Kusel, I'm a children's librarian in Arlington, Virginia, and I look like this: 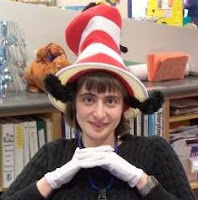 The real debate is: where do I put my polls now? Above the picture and info on the sidebar or below it? I can't find a Blogger template that uses three columns.

Revealing my name is pretty much a moot point, because if you Google me, you'll find this blog. But, I just read the third recent link that referred to me as "the children's librarian who blogs at Wizard Wireless" and I couldn't take it anymore. So, the time has come to fully step out of anonymity. I think it's the right decision for me.

Also, on the sidebar, you'll find out a few things about me. As long as I was going for the big reveal, I thought it was a good idea to post a bit of information about me and Wizards Wireless.

I said I don't do reviews on this blog, but actually I have done a couple. To clarify, if I do a review, it'll be about a book I've picked on my own and never an unsolicited one. (Excepting the Harry Potter Lexicon, which I'll be writing about shortly.) That being said, if you want to send me picture books, comic strip collections or books about Harry Potter, I won't complain. And if you've got any original comic strip art kicking around, I'd be happy to take that off your hands anytime.

Have you wrestled with the issue of using your real name on your blog? What conclusions have you come to?

Also, tell me who you are. I honestly have no idea who reads this blog and am always surprised when someone mentions something I blogged about in real life. Leave a comment in this post, join the Wizards Wireless Facebook page, or add Wizards Wireless to "Blogs I Follow" under your Blogger Profile. It would be great to find out who my audience is!

Head on over to the Cybils (The Children's and Young Adult Bloggers Literary Awards) to see the list of 2008 finalists.

I know the judges worked very hard to come up with such an excellent list. I can't wait for the announcement of the winners on February 14.

And, hey, this year a book I nominated actually became a finalist. Three cheers for Wanda Gag: The Girl Who Lived to Draw, by Deborah Kogan Ray, a finalist in the non fiction picture book category.
Posted by Susan Kusel at 9:32 AM 1 comment: