Are you a fan of Calvin and Hobbes? (Who isn't?) Then check out this interview with cartoonist Bill Watterson, his first in over 20 years. I have a lot of respect for him for never allowing his characters to be commercially licensed. Also, I think he makes a valid point in the article about knowing when to walk away. 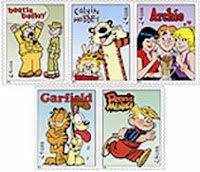 For the first time ever, Calvin and his stuffed tiger will legally appear on something other than a book. The United States Postal Service is releasing a collection of "Sunday Funnies" stamps in July, 2010. Ironically, the Calvin stamp is included with several long running comics that haven't known when to leave the party.

Archie first appeared in 1946, Beetle Bailey in 1950, Dennis the Menace in 1951 and Garfield in 1978. All are still being published, even if the original creator has passed away or is only marginally involved. In stark contrast, Bill Watterson drew every panel of Calvin and Hobbes and it only ran from 1985 to 1995.

As a children's librarian, I can tell you that Calvin isn't going away anytime soon. In fact, it's probably the most popular series at our library. Here's a post I wrote for PBS Booklights about the magic of Calvin and Hobbes. 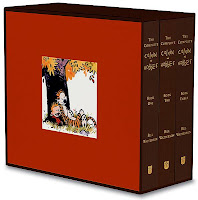 In 2006, Andrews McMeel released a beautiful three volume set called The Complete Calvin and Hobbes. I've never read it. Do you know why? Because it contains every single strip. If I don't read it, there's always a possibility that I'll find one more book or one more strip I haven't read. 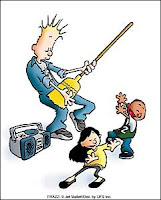 Have you read every Calvin and Hobbes strip and wish there were more? Check out Frazz, currently in the newspaper and on the web. It's got a similar philosophy and sense of humor that Calvin does, with its own quirks thrown in. It's one of my favorite comic strips.

Do you wish Calvin and Hobbes was still running or do you think Bill Watterson walked away at the right time? See the poll on the sidebar.
Posted by Susan Kusel at 7:06 PM 6 comments: