America is Under Attack

Kids surprise me. Especially my kids.

Several months ago, I read an advance copy of a great non-fiction picture book about September 11th called America is Under Attack by Don Brown. Thoughtful, well illustrated, and full of both intriguing and heartbreaking facts, it drew me in and stayed in my thoughts long after I finished it. 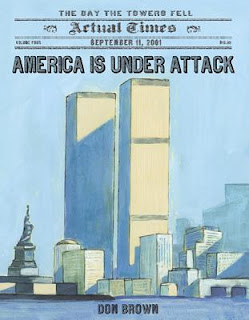 Recently, I was giving a presentation to a group of adults about upcoming children's book highlights for fall 2011. I mentioned the book, along with many other upcoming favorites. The adults looked at me in a shocked way. They asked why would anyone want to talk to kids about something like that.

I had shied away from talking with my son directly about the attacks. We had read one of my favorite books, The Man Who Walked Between the Towers, and had talked about it abstractly but without much detail. Then, the 10th anniversary of September 11th happened, and the subject was almost impossible to avoid. We live minutes away from the Pentagon, and the topic was on the radio, in the newspaper and on television every day,

I explained the basic facts as best I could, and then pulled out America is Under Attack. We read it slowly, pausing whenever needed. He asked thoughtful questions and digested what I was telling him. I was grateful to have a book that presented the facts in a clear and direct way.

One of the better books on the subject, America is Under Attack highlights a number of different stories that took place in the towers that day. The pictures are clear and bold without being shocking or overly graphic. The variety of stories humanizes the event and fills it with various characters. The footnotes in the back are both helpful and informative.

And it was just the right book for my son, who was relived to finally have the facts.  He had been so confused about it, he said. He only knew parts of it, and was glad to have the whole story and know what had actually happened. A few weeks later, he surprised me by going independently to his school librarian, asking for more books on the subject. In the end, I was impressed. Who knew a 7 year old could be so mature?

I was grateful to have just the right book for both the adults in my presentation and the child in my life.

See here for an interview School Library Journal did with author Don Brown, and here for a discussion guide from Roaring Brook Press, the publisher of America is Under Attack.
Posted by Susan Kusel at 8:18 AM